Our farm lies perched above a broad wetland valley. Back in the mid-80s I heard something we had never heard before, the unison calls of a pair of nesting sandhill cranes. When it was verified by our local conservation warden and by the University of Wisconsin, we could claim to have reported the first nesting pair of sandhill cranes in the La Crosse area in a very long time.

Since then, our neighborhood has maintain a spring “Crane Watch.”   Some of those dates and comments appear below. For more recent years, please use the SEARCH button to

see stories about the cranes! The quote at the end of this piece is one of my favorites from Aldo Leopold.

Excerpt from A Sand County Almanac by Aldo Leopold

“The sadness discernible in some marshes arises, perhaps in their once having harbored cranes. Now they stand humbled, adrift in history.

“Someday, perhaps in the very process of our benefactions, perhaps in the fullness of geologic time, the last crane will trumpet his farewell and spiral skyward from the great marsh.

“High out of the clouds will fall the sound of hunting horns, the baying of the phantom pack, the tinkle of little bells, and then a silence never to be broken, unless perchance in some far away pasture of the milky way.” 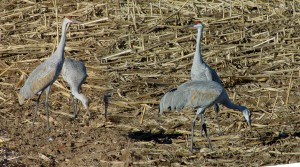