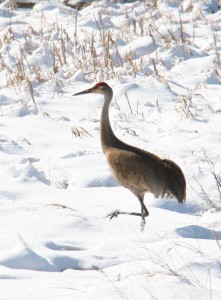 Well, this is a first! I’m starting to hear that folks south of La Crosse are hearing Sandhill Cranes… but normally, I don’t release such reports until I confirm for myself that nesting cranes have moved in.

This year, there have been a number of interesting Sandhill Crane reports. So far, I’ve heard of 1) a group of 6 or so cranes who spent the whole winter in Wisconsin 2) cranes gathering in Madison by March 1, and finally a phone call that cranes were calling along Coon Creek south of La Crosse by March 4. But it’s been like -12 degrees, and the few minutes I could stand outside, didn’t happen to be the moments that cranes were calling.  So yes, I think they are back right on time this year. We should all be seeing them as temps warm up this next week! Once the ice begins to break up (not happening yet) Tundra Swans should be moving in.