Could an Earthquake Happen in the Midwestern United States? 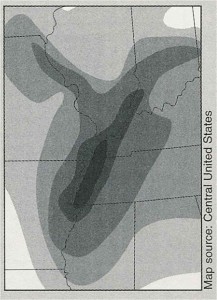 With all the media coverage of the 7.0 magnitude quake in Haiti
in January 2010, interest has shifted to the USA.

We all think of California immediately, but could it happen
here in the MIDWEST? Think NEW MADRID FAULT,
right under the Mississippi River!

Scientists suggest there is a 25% chance of a 7.5 magnitude quake by the year 2040. A quake of this magnitude would be felt throughout half of the United States and cause damage in twenty states or more.

The New Madrid Fault is a major active fault line that runs approximately from Memphis, Tennessee, to St. Louis, Missouri. On Dec. 16, 1811, this area was hit with an estimated 8.6 magnitude quake on the modern-day Richter scale. This was the first of THREE major quakes to rock the Midwest. A second quake on January 23, 1812 is estimated to have been an 8.4. A THIRD shock on February 7, 1812, is estimated to have been the strongest jolt ever to hit the North American continent at somewhere near 8.7 to 8.9.

We pulled some illuminating facts from Volume 3 of DISCOVER! America’s Great River Road…What would an 8.7 magnitude earthquake feel like?

When the tremors and convulsions of the earth subsided, 30 to 50 thousand square miles of land had undergone vast topographical changes. Most of which are visible today. In the northwest corner of Tennessee, land dropped 10 to 20 feet and caused the Mississippi River to flow back upon itself which formed REELFOOT LAKE. In places along the Mississippi River, I have seen sandboils which still lie barren, or waves of undulating earth frozen into the compacted soil.

The New Madrid fault system extends 120 miles southward from Cairo, Illinois, through New Madrid andCaruthersville, Missouri, following I-55 free way system to Bytheville and on down to Marked Tree, Arkansas. Buried five to to ten miles underground (similar in depth to the Haiti quake), it crosses five state lines and cuts across the Mississippi River in three places.

THE USGS maintains a real time list of tremors along the New Madrid fault. Click map image  to see the map for today.

Return to our general INDEX of FEATURE STORIES
Return to the MISSISSIPPI RIVER HOME PAGE at www.greatriver.com

Stories from SURVIVORS of the New Madrid Earthquake of

Witnesses report that about 2 a.m. on December 16, 18aa, the earth around the little settlement of New Madrid, Missouri, began to rise and fall like waves upon the sea. When the peaks of the waves rolled through the Mississippi River, the river bottom heaved up, emptying the river onto its banks, inundating the shores and leaving some boats on dry land. When the troughs followed, the river rushed back into the hollows with such force that entire groves of trees were drawn out by the roots and thrown into the river.

On dry land, trees bent like heads of grain in the wind, their ranches interlocked, until they were ripped from the ground. Cracks formed in the earth that sometimes ran for MILES. The quake’s ground wave created sunken lands, fissures, and domes. Sand blows eruped sand and belched hot water, fumes, and carbonized wood.

Mattis M. Speed, a river traveler in February, 1812, described his experience.  “We were awakened about 3 a.m. by the violent agitation of the boat accompanied by a noise so terrible it can best be described as the constant discharge of heavy cannon. The banks were falling into the river and the island to which we were tied was sinking. We cut ourselves loose from the island and pulled as far from the banks as necessary to avoid the falling trees. The swells of the river were so deep as to threaten the sinking of the boat with every minute.”

When he pulled out of the maelstrom at New Madrid, he wrote, “The former elevation of the bank was about 25 feet above common water. When we reached it, it was barely 12 or 3 feet. Scarcely a house was left entire, some completely prostrated, others unroofed and not a chimney standing.”

One man described holding to a tree to support himself during a quake. A fissure opened in the ground and both he and the tree fell in. He was unable to climb out of the fissure at that point and was forced to walk along it until an incline allowed him to scramble out. Fissures as deep as 100 feet ran for miles through the countryside.

Both Reelfoot Lake, Tennessee,  and St. Francis Lake in Arkansas were formed by the New Madrid Earthquake in 1811, 1812. A citizen from New Madrid, Missouri, wrote in 1816, “Lately, it has been discovered that a Lake was formed on the opposite side of the Mississippi River, in the Indian country, upwards of 100 miles and from one to six miles wide, of a depth of from 10 to 50 feet.”

The epicenter of the quake was about 70 miles southwest of modern Reelfoot Lake and more than 1800 recorded tremors, some of which rang bells on the east coast, followed by the first powerful jolts.

In 1815, Congress passed an act to relieve area inhabitants who found their riverside farms swallowed up or buried in the sand that spewed from the earth. More than 500 earthquake “certificates”, redeemable for up to 640 acres of government land, were allotted. The site of Hannibal, Missouri, was one of the resultant land grants.

A dome-like rise in the otherwise perfectly flat land is clearly visible on the west side of Reelfoot Lake, on the road from the Airpark Inn to Tiptonville, Tennessee.  The Tiptonville Dome formed when the land around Reelfoot Lake sank during the earthquake. Above the newly formed depression, the Mississippi River appeared to flow backward when the waters rushed to fill the depression–the center of which is now Reelfoot Lake.

The raising of the dome also created a natural dam that, for a short time, forced the Mississippi River to flow back south upon itself. The same dam trapped water in low swampland in the vicinity of Reelfoot Creek and Bayou de Chien, eventually allowing Reelfoot Lake to form.

Return to our general INDEX of FEATURE STORIES
Return to the MISSISSIPPI RIVER HOME PAGE at www.greatriver.com