For Jack, who wants to know more about all the tributaries of the Mississippi River: how many there are,  their names, and how long they are! 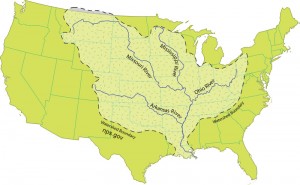 There are some 250 tributaries of the Mississippi which drain a total area of more than 1,247,000 square miles–one third of the nation’s landmass–extending from the Allegheny Mountains in the east to the Rocky Mountains in the west!

We start here with quick facts on the Mississippi River and several navigable tributaries! Please follow links for a little more depth of historical interest and to see

our collection of hand-painted maps!

The Mississippi River, from its source at Lake Itasca in Minnesota, to the Gulf of Mexico, is approximately 2,348 miles long. The combined reach of the Missouri-Mississippi Rivers is 3,741 miles–a length exceeded only by the Amazon and Nile rivers. The Mississippi River has shortened by several hundred miles since the days of Mark Twain. Even today it varies 30-50 miles each year.

The widest navigable part of the Mississippi is Lake Pepin, on the Upper Mississippi, where it is approximately 2 miles wide. The average current flows from 1.2 miles per hour nearer Lake Itasca, and about 3 mi per hour nearer New Orleans.

Our Mississippi River Ribbon Map has been a best-selling Gift for many years. Lisa now offers her own custom ribbon map designs of both the OHIO RIVER and the Missouri River. Please click on any map image for more info on the map or the tributary. Or PHONE 888-255-7726 to order any map. Mention you saw it on greatriver.com for a one time 10% discount!   Click on map images for more info on the tributaries.

Major TRIBUTARIES OF THE MISSISSIPPI River 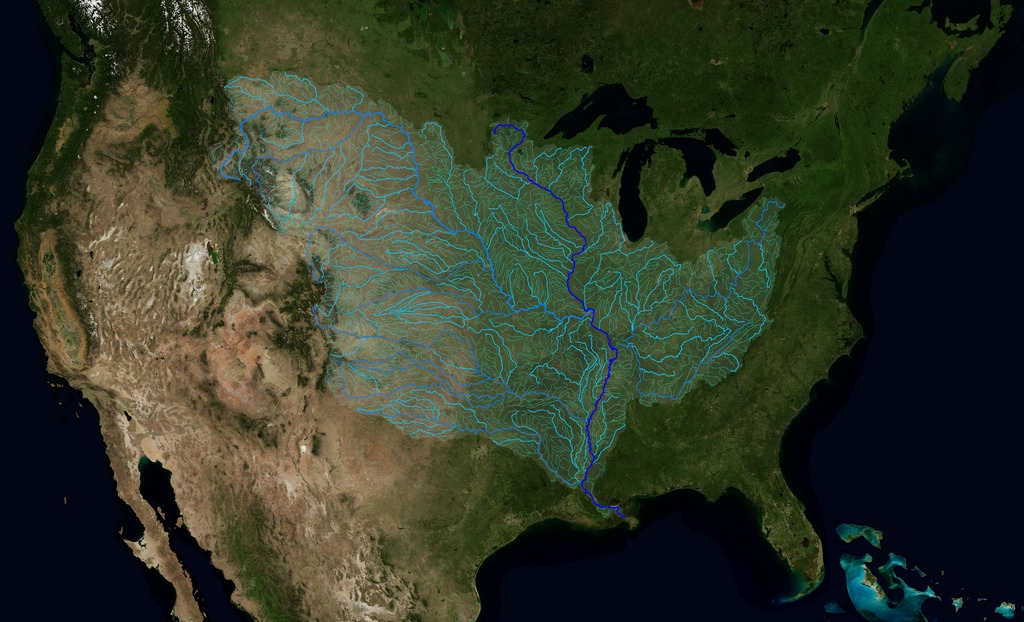 The Arkansas River forms in the Rocky Mountains in Colorado and meanders 1,450 miles through Kansas, Oklahoma, and Arkansas.  It is the main water source for the state of Arkansas.

The Ohio River is the second major tributary of the Mississippi. It is formed in Pittsburgh by the junction of the Allegheny and Monongahela River and travels about 980 miles to Cairo, Illinois, and the Mississippi River. Interestingly, today’s Ohio River Basin is approximately the northern extremity of the ancient shallow sea that is represented today by the Gulf of Mexico! Consider that nearly 1/3 of the nation’s water drains past the confluence of the Ohio and Mississippi rivers at Fort Defiance in Cairo, Illinois!

The Illinois River, cutting through steep rocky bluffs, runs approximately 273 miles (439 km), with some 60 miles of scenic water. It flows through the heart of the State of Illinois,

and links the great rivers of the American West with the Great Lakes, the St. Lawrence Seaway, and finally the Atlantic Ocean.

The promise of free land in the 1870s led many to migrate and subsequently settled on the banks of the Illinois River as homesteaders. Cultures, families, and livelihoods were created on the riverbanks shaping the river culture of the region. The Illinois River and its lakes shaped the early industries of the state, making it one of the world’s largest freshwater fisheries. However, as the 19th century progressed, the Illinois River was hit with industrial pollution, silt from farm lands, and human waste. Ultimately, federal and state intervention restored the dying Illinois River.

Today, stretches of mild rapids make for great float trip experiences on the river as one paddles  by bluffs, gravel bars, and lush forests. Fishing for smallmouth and largemouth bass, walleye, and channel and flathead catfish on the Illinois River makes it an exciting destination. Birdwatching for bald eagles also makes this waterway a treasure.

And for fun, checkout our fascinating 1841 STEAMBOAT MAP OF ILLINOIS
lists all the steamboat stops and distances along the Illinois River and the Mississippi, Ohio and Vermillion Rivers!