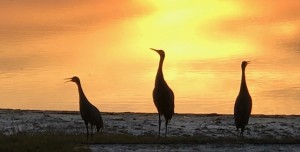 During our brief early February “summer” our Mississippi River big birds made their move to the North.

Sandhill Cranes, in.
Tundra Swans migrating north overhead in huge flocks… check.
Bald Eagles are currently everywhere… 17 on the edge of the river ice, 4 circling up ahead, 3 in a dead tree. And more on the nests! It is a great moment to be out observing the transformation to spring!

How early are the cranes this year? Several days earlier than my historic “early date” of Feb 23, 2005! Here are some more arrival dates:

Finally, check out this river snapshot! Could that be an adult Golden Eagle confronting an adult Bald Eagle? And what about the immature on lower right? Is it Bald or Golden? I’d love your opinion! 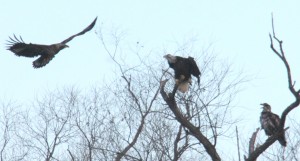 Get out there and enjoy before the next storm hits!