It’s that time of year when our huge winter population of American Bald Eagles begins to Cluster around the open water below the dams on the Upper Mississippi River. The Iowa DNR is releasing a series of posts on their Bald Eagle Midwinter Survey which may interest many of you!

Iowa is one of the most important wintering grounds for Bald Eagles with thousands of the huge raptors moving into the state from the north to join our resident breeding birds.  Wisconsin, Minnesota and Michigan all have some of the highest densities of nesting Bald Eagles in the lower 48 states and many of those eagles, especially from MN and WI move into Iowa during the winter months and frequently gather in large numbers around areas of open water to feed and roost. 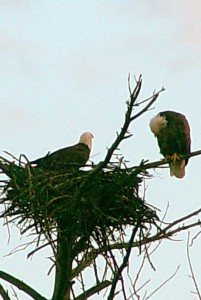 Since the early 1990s, the Iowa DNR, plus a small army of volunteers has recorded this phenomenon during the Bald Eagle Midwinter Survey that takes place in the first two weeks of every year.  Surveyors scope the trees, air and ice for Iowa’s largest raptor while driving snowy roads which wind along next to many of Iowa’s biggest rivers.  There are 52 set routes in Iowa that cover over 1500 miles in 45 counties and along at least 13 rivers.  The Des Moines and Mississippi river host the largest number of Eagles, which can usually be found concentrated below a dam or other area of open water.  While Bald Eagles are very territorial during the nesting season, they are much less so in the winter though you may witness a squabble or two over a coveted fish at these congregation spots.

Bald Eagle Trends: In Iowa, the survey has revealed a steady increase in Eagle numbers since the survey began. There are big fluctuations from year to year based on weather, ice coverage, and food resource availability among other things but overall the trend has been upward. That rise in numbers has started to plateau in recent years as Eagle populations stabilize throughout the Midwest region. Bald Eagle Trends:

Another important statistic we track is the percent of Immatures versus Adults in the count.  A good and steady number of immatures is a sure sign of a healthy population.  About one-third of the birds counted on the survey are immatures and this trend has stayed steady for many years. (More Survey Results to be posted soon)