So what possessed Victorians to send Christmas and other greetings with illustrations of dead birds? One such card reads, “Sweet messenger of calm decays in peace Divine.” 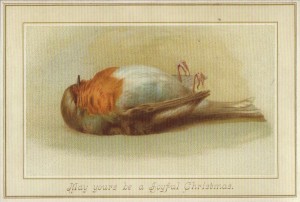 It may hark back to an archaic English celebration of St. Stephens Feast Day, on Dec 26, when folks went out and killed a robin… or a wren… and saved the feathers for good luck. Often young boys in the village would visit homes and exchange feathers for a treat!

During medieval times, Dec 26 was the only day when a wren, considered sacred, could be killed. In fact, “King Wren” was paraded through the village in its death box…  which may actually date back further to a Druid tradition when the priest-king of the tribe was sacrificed to avert disaster for the tribe. Over time, English robins replaced the wren as the symbol.

But were the Victorians really connecting dead birds to tribal druid kings? According to Chan Robbins from an Audubon Science video on Vimeo, another Christmas tradition evolved in New England before the turn of the century which involved birds and small mammals.

The townsmen on Christmas Day engaged in a holiday tradition known as the Christmas “Side Hunt”: They would choose sides and go afield with their guns to shoot as many birds and species as they could that afternoon. The resultant pile of feathered (and furred) quarry were sorted by species and counted. The team which had shot the most, won.

Conservation was in its beginning stages around in that era, and many observers and scientists were becoming concerned about declining bird populations. Beginning on Christmas Day 1900, ornithologist Frank M. Chapman, an early officer in the nascent Audubon Society, proposed a new holiday tradition-a “Christmas Bird Census”-that would count birds during the holidays rather than hunt them. 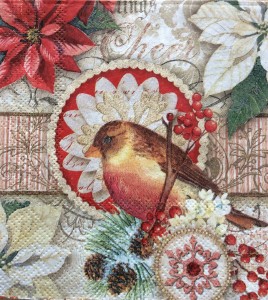 English robins continue to festoon modern Christmas cards, though they are alive and nestled among poinsiettas and berries!!

With that, I would like to wish all of you a Very Merry Christmas season!