Author’s note:  I met Captain Lawrence while he was piloting the Mississippi Queen; for most of his career he has been a towboat pilot. He shared with me some of his thoughts about the river and those of us who use and enjoy it.  © Pat Middleton, “Discover! America’s Great River Road, Vol 2.” 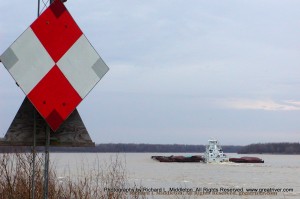 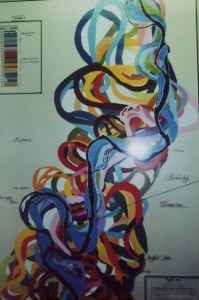 © Great River Publishing
Stoddard, WI 54658-9801
All Text and Images are copyrighted by the authors and photographers. All Rights Reserved. To request permission to reproduce content in any format, please phone 608-457-2734 .

THE OHIO RIVER, from the series, TRIBUTARIES OF THE MISSISSIPPI RIVER
c Pat Middleton, greatriver.com

Numerous overnight cruising paddleboats are once more cruising the Ohio River! Our single most popular map of the Mississippi is a Ribbon from 1887 designating all the towns along the river… and map artist, Lisa Middleton, now makes her hand-painted RIBBON MAP of the OHIO RIVER available to all!
Click map image below to visit www.greatriverarts.com>Shop>Ohio River

The Ohio River begins in Pittsburgh, Pennsylvania at the confluence of the Allegheny River and the Monongahela River, extending roughly 900 miles downstream and ending in Cairo, Illinois. Throughout time, the Ohio River has been called many names by different civilizations. The Shawnees called it Spaylaywitheepi, the Miami tribes, the Causisseppione, the Delawares, Kitonosipi, and the French, La Belle Riviére, meaning “the beautiful river.” It was called the “River Jordan” by slaves escaping to freedom in the North using the Underground Railroad in early 1800s. The name Ohio comes from the Iroquois word, “O-Y-O,” meaning “the great river”.

As early as 700 B.C., the first humans on the river were the Adena culture, followed by the Hopewell culture around 400 B.C. The Adena culture made their mark on the land erecting unique conical burial mounds along the river’s course and its tributaries. The Hopewells had larger earthen mounds in the same area as the Adenas. Later, the Shawnees, Cherokees, Iroquois, and Miamis, used the Ohio River at different periods as a site to launch violent raids, dubbing the river the “River of Blood” by the tribes.

In the 1670s, the French established trading posts along the Ohio River tributaries, including the Beaver, Wabash, and the Scioto Rivers — but the Ohio River remained unexplored. The first European to see the Ohio River was Frenchman Rene Robert Cavelier Sieur de La Salle in 1669. By the 1880s, the Ohio River became an important commercial route, and also a transportation route for families who migrated to establish settlement in the West.

Today, the Ohio River continues to serve as a major artery for transporting coal, grain, steel, and manufactured articles. The Ohio River is still important to communities, providing drinking water and as well as boating, fishing, swimming, and other water sports.

Other available fine art Ribbon Maps include The Mississippi River and the Missouri River. Please click links to view maps and Tributary information!

We also have two FRENCH maps available with details of the OHIO RIVER. Both Maps are also Rich in Mississippi River info. (To study maps at greatriverarts.com use the Hi Rez magnifying glass that pops up when you hold your cursor over an image.)

Return to the MISSISSIPPI RIVER HOME PAGE at greatriver.com

This handsome collection contains all of our western historic maps dating from the early 1800’s to the early 1900’s.  In it are our contains Bartholomew maps, Territorial Maps, Wagon Road Maps, Railroad Maps, and many of our S. Augustus Mitchell maps. … Continue reading →

Our collection of Antiquarian maps and maps of the age of discovery is growing.  Although we may live in different parts of the country and world, these are the maps that we all have in common. Please Click Here … Continue reading →

Our Non United States Map Collection is based on Lisa’s travel musings and special requests. If you don’t see a map you’re interested in please let Lisa know and she will update you on availability. The maps are in English … Continue reading →

Many of Lisa’s hand painted original paintings are still available unframed. Or you may order a high quality UV resistant Giclee in two sizes. Each original and giclee include a certificate of authentication and historical statement. Simply choose the map … Continue reading → 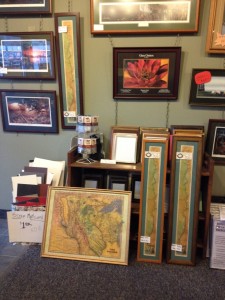 I walked into Village Custom Frame in La Crosse, WI, the other day and found Sue busy at work filling orders for Lisa Middleton’s historic map prints ordered for Christmas giving. The framed maps 1887 Ribbon Maps are a GREAT idea for a corner nitch, or between two windows, or as a cabin feature!

If you don’t live in La Crosse, Stockholm, Alma, Winona, or Wabasha … where many of the frame shops sell Lisa’s maps already framed… you can now order FRAMED 1887 Mississippi River Ribbon maps at the Great River Publishing gift shop on ETSY.com/shop/greatriverpublishing 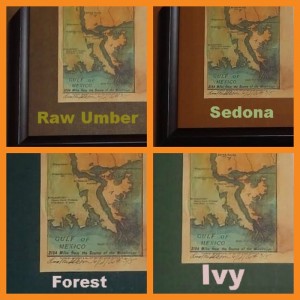 $145 includes choice of mat color (choose from those samples show) with a dark wooden frame in black or brown. Maps can be shipped directly to the recipient!

Questions? Ready to order? Have another of Lisa’s historic map paintings you’d like framed and shipped? Want to frame the original painting?

Your shopping cart is empty
Visit the shop