Merry Christmas everyone! I enjoy sharing images I run across of some of nature’s more beautiful creatures… the nearly white leucistic (leucitic) creatures that live in our forests and yards. Use the key words “white phase” of leucistic in the search box above to see more images.

The Grizzly Bear below has a story I can share. It was photographed by a family driving near Banff National Park, Alberta on the Trans-Canada Highway. Park staff have been monitoring the white grizzly and its sibling since 2017.

The Clarkson family actually spotted two grizzly bears searching for food on the highway. One of them was ordinary while the other one was pure white. Cara claims that they are very “lucky because white grizzly bears are unheard of.”

A local bear expert and ecologist, Sarah Elmeligi, agrees with Mike’s statement and claims that the result of the bear’s color is recessive genes.

Banff National Park staff have been monitoring the white grizzly and its sibling since 2017. At the time, the white grizzly left its mother and the staff named it Nakoda. The meaning of its name is ‘ally’ or ‘friend’ in the language of the native people of Stoney Nakoda Nation.

I have been thoroughly enjoying a conversation on the Wisconsin Bird network online list. The chatter just now includes quite a bit about leucistic birds in Wisconsin… apparently it all started when someone reported a leucistic pileated woodpecker that returns annually to the same area. This fellow, while mostly white, retains its red crest!

Every so rarely a genetic WHITE PHASE appears in animals that are normally not white (except as albinos). But leucistic birds (deer, bear, moose!) are not albinos, and they can have s matters of white and smatterings of more colored feather, fur, or skin.

Albinism is a condition in which there is an absence of melanin. Melanin is what is present in the skin and is what gives skin, feathers, hair and eyes their color. … Leucism is only a partial loss of pigmentation, which can make the animal have white or patchily colored skin, hair, or feathers

The pictures on this page show not albinos, but a “white phase” or leucistic variation of the various species. Unfortunately, things are never as easy as you think that they should be!

John, from Mercer, Wis., contacted a genetistic who added the following information:

The literature on albinism clearly states that there are different kinds of albinism, and that some albinos may show some color in their irises – often a light blue or gray. An animal can be a pure albino or a partial albino. The most critical factor in producing melanin, the organic pigment that produces most of the color seen in mammals and birds, is the presence of a special enzyme called tyrosinase – the “TYR” gene (google this for all sorts of technical treatises). If the TYR gene fails completely, an all-white, light-eyed albino animal will be born. However, the TYR gene can be altered in dozens of ways, producing other albino variations, such as albinos with light eyes but with some color on their fur.

What caught my attention in the conversation was a post from Maryland. She commented that most leucistic animals she hears about seem to come from Wisc., Minn, and the Northwest.

“Does anyone know why that is?” she queried. Numerous learned responses indicate that it is entirely genetic, and not more common in the North.

That got me thinking about some of theories that abounded about birds, white buffalo, deer, and other such white or “Spirit Creatures” in the early 2000s.

Then, popular theory seemed pretty settled that these “white phase” or “Spirit” creatures are expressing recessive genes that helped to protect the species during the ice ages. I saw data which I didn’t save which demonstrated how quickly dark mammals would turn white as the dark animals turned into prey and those with a recessive white gene began to multiply.

In Wisconsin, a northern game warden told me that in his life time, he’s heard of two white phase bear cubs… both in the vicinity of Superior, Wisconsin. Hmmm… makes sense. The same game warden has seen only one white phase sparrow… nearly 40 years ago. I saw a white English sparrow in our yard a few year ago.

I wonder if the white phases of various birds of prey are also expressing recessive genes related to living along the edge of glaciers? I’ve also heard of Mississippi River islands with concentrations of white phase muskrats, and white phase deer  I’d love it if you could share photos of your “white phase” creatures for use in a future feature article.

Above is a very rare “white” black bear cub photographed in the west. Also known as Kermode or “spirit” bears. Normally found only in areas where the recessive white gene was encouraged by small populations cut off from the larger populations, probably by glacier formations. The white gene would have been advantageous to bears living on the edge of the snowfields.

One of my favorite leucistic (white phase critters) is this Moose! Not an Albino… see those dark eyes? But definitely a survivor in the Ice Ages!! 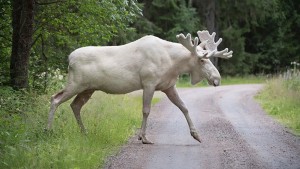 And below is an ALBINO deer, notice the pink eyes, pink nose, etc. 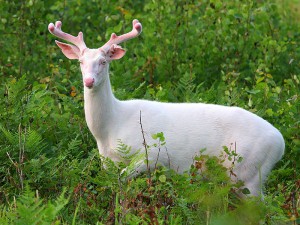 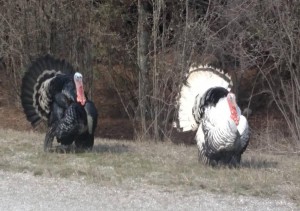 Here’s a nice discovery for November! Wild Turkeys quite commonly appear in their white phase. Again the white version is not a mutation, or “half domestic”, it is simply a white phase of our familiar turkey.  Use the SEARCH button to see more of our “white phase” collection!  We saw these too at HIDDEN HILLS off Hwy K, near Goose Island. Our toddlers enjoyed seeing the pigs, goats, turkeys, calves, and all! 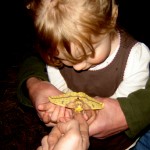 A first sighting of an Imperial Moth has been recorded in Vernon County, Wisconsin, along the Mississippi River.  According to our source, the moths appear to be making a slow progression northward up the river.  It had previously been found in southern Crawford County, the county below Vernon.

Have you found a moth or butterfly you’d like to report to someone? The USGS has a link where you can do just that…    Please see http://www.butterfliesandmoths.org/faq/report for reporting instructions.
USGS National Biological Information Infrastructure
Big Sky Institute, Montana State University

The “Rarest and Cutest” Creature on Earth!
A White Phase Lion cub with siblings! 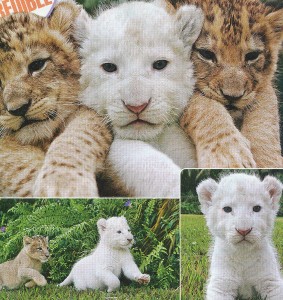 On a recent birding trip to Panama in December, I was priviledged to sit next to a Smithsonian scientist who had been studying tropical Panama for 30 years. He spoke of the difference between cold weather creatures and tropical creatures. The key word for mammals that must survive in temperate climates is ADAPTABILITY. Tropical plants and animals are experts in finding SPECIALIZED NICHES. Lions have not always been confined to Africa! More about that to come!

Meanwhile, visit our new TRAVEL PHOTO site at www.greatriver.smugmug.com to see photos from the Panama Trip!