I was amazed to read this a.m. of the tornado which destroyed the St. Louis International Airport as well as nearby neighborhoods late Friday night.

Visit www.weather.com for video and forcasts of continuing severe weather through the Easter weekend.

There is about 200% more moisture involved in this stalled front than is normal, which poses a real threat of continuing heavy rain for the next three days. This increases the threat of flooding on the Mississippi and other rivers through the Ohio River Valley.

I have been on the Mississippi River when rains in Kansas caused the Mississippi to raise 30 feet over night… we woke to a river full of floating logs, full sized trees, and other debris picked up by water raising in the back waters.

While another 6-14 inches of snow that fell in Wisconsin on Good Friday is likely to be short-lived, melting snowpacks in the north and massive rains (up to a foot in many places) in lower Midwestern states has precipitated a flurry of Flood Reports to www.greatriver.com  Here’s what I heard overnight:

The high-water crest is likely to be April 8  in Baton Rouge. Water levels are not expected to breach any levees.

A flood warning is currently in effect along the Mississippi River for parts of Illinois, Missouri and Kentucky. The Mississippi River at Cape Girardeau is still expected to crest at 44.5 feet Sunday despite levels being lower than expected north of the region. Flood stage is 32 feet. In Cape Girardeau, crews are racing to close the big steel flood gates that safeguard the town from the rising river.

Widespread flooding in Arkansas has washed out some highways and led to evacuations in some areas, said a spokesman for the Arkansas Department of Emergency Management. Heavy winter snow combined with recent rain indicates parts of Wisconsin and Illinois should see minor to moderate flooding, with as much as a 20 to 30 percent chance of major flooding on some rivers in southern Wisconsin and northern Illinois.

Some residents of southern Illinois had to evacuate. In Marion, Illinois, firefighters used their own fishing boats to rescue residents. At Paducah, Ky., the flooding on the Ohio River is expected to peak at 47.0 feet by Wednesday morning. The river’s flood stage is 39.0 feet. From historical floods, officials know that property damage begins along the river’s banks when the water rises to 47.0 feet.

A record flood is forecast for the Meramec River near Eureka, Mo., which is located south of St. Louis. By Saturday afternoon, the river is expected to slightly rise past the current record flood level of 42.9 feet from Dec. 6, 1982.

While the recent heavy rain bypassed the lower Mississippi River, residents along its banks are being warned that prolonged flooding will ensue. As water from its tributaries continues to flow downstream, the river will continue to rise. 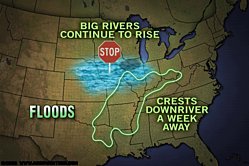 The Mississippi River at Natchez, Miss., is forecast to exceed its flood stage of 48.0 feet by Tuesday. The river is expected to rise at least 5 more feet by Sunday, April 6. The National Weather Service is reminding people to be aware and be prepared for flooding in their communities. There is no expectation that current flooding will be more than a passing crest… unlike 1993 when the high water settled in and the entire river was closed for two months.

As for travel in these states, I know from our flood experience in Wisconsin that nothing devastates tourism like these flood reports. Yet pictures like the one above are generally tiny pockets in the overall travel picture. Call ahead to double-check. Be aware of your surroundings. NEVER drive onto water covered roadways. But chances are there is no reason at all to cancel travel plans unless you planned to be right in the path of a flood-cresting river.