This is just to let your know that while White Pelicans still abound, they are clustered up in tight pods wherever they can get out of the wind. Check your favorite Eagle nests…those I like to watch all still have adults in them, but I did have a report that during one of our sleet storms a nest was abandoned. No Tundra Swans, of course, but there are Trumpeters! Walked through Goose Island and many of our spring waterfowl are still here. Eagles are abundant, indeed. Sandhill Cranes on their nests. Beaver, muskrat, even herons are out and about. Find them sheltering from the wind and looking for some of the warmer weather forecast for next week.

Ice has begun to clear from the Mississippi River, and like clock-work, our puddle ducks, diving ducks, White Pelicans, Trumpeter Swans, Sandhill Cranes and Tundra Swans have begun the great move northward. About the 5th of March, we were already hearing the Cranes and the Tunda Swans. This week, the great white Trumpeter Swans have begun passing our porch windows into the small ponds and creek of the valley. For the past four days, large pods of White Pelicans are clustering all along the river from Stoddard to Goose Island. Sandhill Cranes are now establishing their territories and making a rukus!

Except for a sloppy snow day today, river birding has been great. As the weather clears up visit the many roadside rest areas along Highway 35 in Wisconsin. Bald Eagles are abundant–a couple dozen at a sweep of the eye, clustered along the floating ice sheets and beside the big black nests. Happy Spring!!

Calling all wildlife watchers! The Iowa DNR will be hosting two live online training workshops for anybody interested in becoming a volunteer bald eagle nest monitor in Iowa. Prospective nest monitors must attend one of the two scheduled workshops. The workshops will be held via Zoom on Saturday February 20th from 10:00 am to noon OR Monday February 22nd from 6:30 pm to 8:30 pm.

Community science volunteers have been helping to monitor Iowa’s eagle population since 2006. Workshop participants will learn about this program and how to get involved and monitor a nest in their area of the state. Iowa has over 400 active bald eagle nests across the state plus many more that have an unknown status. In 2020, volunteer nest monitors collected data on roughly 250 of these nests!

Program coordinator Stephanie Shepherd explains, “With more than 1000 wildlife species in the state, we just don’t have enough staff in the DNR to adequately monitor all the vulnerable species that need attention. This is where community scientists play a crucial role.”

To be a bald eagle nest monitor you will need a pair of binoculars and preferably a spotting scope. Nest monitors are particularly needed in the following counties; Allamakee, Clayton, Delaware, Floyd, Greene, Guthrie, Henry, Jones, Lucas and Winneshiek Counties; but interested people anywhere in the state are welcome. We will try to match you up with a nest near your home base. The time commitment for conducting the survey and submitting data is roughly 6 hours total between March and July each year and will require multiple visits to a nest.

Each workshop will be limited to 20 households and a $5.00 fee is required. Registration will close on February 17th at 5 pm or whenever the 20 household per workshop limit has been reached. Direct questions to Stephanie Shepherd at vwmp@dnr.iowa.gov.

Interested volunteers must register for one of two training workshops. Workshops are limited to 20 households each. Registration will close when that number of registrants has been reached or on February 17th, 2021, whichever comes first.

There is a $5 fee to cover workshop materials. For more information and to register, go to www.iowadnr.gov/vwmp or e-mail vwmp@dnr.iowa.gov

With 70 degree days predicted for early next week, we will be seeing more and more of our returning songbirds and waterfowl. Sandhill Cranes, robins, red-winged black-birds, starlings, bluebirds and such are already singing, in addition to Cardinals, titmice and other year-round residents. Sandhills are still very quiet, so they don’t seem to be claiming their nesting territories yet. Send us your comments!!  Click here to see our birding archive on the Ramblin’ On blog.

With so little snow this winter, spring flooding is unlikely this season. To see an interactive flood map, as well as past flooding accounts, click here. 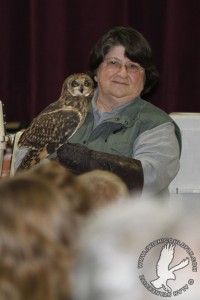 The spring 2012 International Festival of Owls was held in Houston, Minnesota, last weekend. It is another harbinger of spring! (Snowy Owl pix, from Alan Stankevitz is left.)

[adsenseyu2]We had a beautiful barred owl in our backyard early one morning last week. Hawks are paired up and bald eagles are nesting. I’ll be watching for the return of white pelicans next… they follow the opening of the Mississippi River… perhaps looking for fish kill as the ice breaks up.

We have featured WHITE PELICANS, EAGLES and other large waterfowl for many years on www.greatriver.com
Please visit our dedicated Birding Index here at Greatriver.com  It includes a long history of arrival dates for the sandhill cranes in the Upper Mississippi River valley.

Getting quite a few questions on Eagles as November comes to a close. I do believe some of the Canada eagles are moving south, but weather is still mild on the Upper Mississippi River.

With Eagle viewing that is second only to Alaska, we can expect huge clusters, sometimes hundreds of birds in trees above open water… but they are widely dispersed until the river freezes.

Best eagle viewing begins AFTER the Tundra Swans leave, as they tend to leave just in front of the really freezing weather.

So stay in touch at www.greatriver.com and we’ll let you know as the season progresses.

The Canada geese and Sandhill Cranes arrived about 10 days earlier than I expected this year. Ground still frozen, several inches of crusty snow. Three nights ago it was just 15 degrees. They watch the weather currents pretty closely… will delay arrival if they see a storm… so they must know that spring is just around the corner! We’ve located the Valley Bald Eagle’s nest. Believe it is it’s second year. Saw a large handsome eagle standing guard in the neighboring tree last week. Bluebirds and robins abound, but they both spent the entire winter here in the valley. More common than I ever recall during a winter siege! 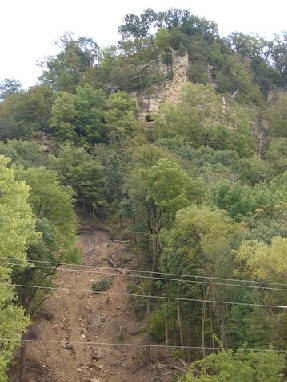 The Root River crested at 18 feet in Houston, Minn.  When compared with previous flooding events, the August ’07 floods had up to 5 times more rainfall.

GEOLOGY 101… WHY Land Slides Happen along the Mississippi River Bluffs 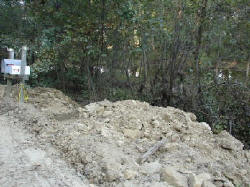 The bluffs of the “Driftless” region that stretches along the Mississippi River are formed of limestone bedrock covered by an ancient mix of clay and river silt. Under most conditions this is provides a solid base for home building, though most counties restrict building to a slope of 20-30%.  Homes that are built on “benches” may have much steeper areas above them (or below). Between 1998 and 2006, 205 homes and 10 condominiums were built in La Crosse County on slopes with between 20% and 30% slopes.

Historically heavy rain during the night of August 19, 2007, meant that water drained from the tops of the bluff to flow into the valleys. Water flowing over the rock faces probably fell like fabulous waterfalls (though I haven’t run across anyone who can claim to have seen it). This completely saturated the clay and silt which cover the bluffs.

According to a La Crosse Tribune story, as water particles fill the space between silt particles the silt and clay firstbecome “plastic” and then “viscous.” When “plastic” it will move when pressure is applied to it (such as the weight of a home). When “viscous” it begins to flow under its own weight… like a glacier, only much more quickly. This flow is what caused the collapse that is so visible in the bare canyons, and the mud and rubble along the base of the bluffs throughout the coulee region.

The soils may have been more vulnerable because the area was so dry, and the water fall so far beyond the historic record. The fact that residents remove the thick canopy of deep rooted trees and brush to plant grass may also have made the bluff sides more vulnerable, according to La Crosse County.

Many researchers point to increasingly severe droughts, rain and heat as the by-product of global warming. So can we expect more such rains? The experts do think so.

Chronology of the Rains in August 2007

When Boulders Roll … Landslides on the River

While walking through deep forest last weekend with a game warden … snow nearly 3 foot deep and no snowshoes… I learned a lovely “Indian trick”… to walk directly on the deer paths visible in the snow. As deer walk their paths through the winter, the snow is compacted. So while the 3-foot deep snow off the paths had us floundering, walking directly on the deer paths provided solid, easy footing.

MEASURING SPRING ICE DEPTHS
River ice is to be measured for the next week to develop a forecast for when the first commercial barges might be able to come north through Lake Pepin. According to KTTC, Rochester, MN, the ice is measured at 25 coordinates between Wabasha and Frontenac, Minnesota.

The tows generally begin pushing up river in mid-March, but ice depths must drop below 12 inches. Currently, the ice is still 17 inches thick. If necessary, barges are lined up in SINGLE FILE to get through the ice. It’s called “mule training.” One new barge dispatcher remarked, “I didn’t even know we still used mules!”

For some great photos and observations from one of those towboat pilots who had to push through Lake Pepin every year, I recommend ONE MAN and the MIGHTY MISSISSIPPI by Capt. Norman Hillman. Look for the “Riverbooks” dock on the home page at www.greatriver.com
MORE SNOW! and dealing with the MELTOFF
Finally we are expecting more snow today, hopefully without any plummeting temperatures. Snow was melting yesterday, so talk of spring floods is starting to perculate. Thus far, official suggestions are that flooding will not be a big issue along the Upper Mississippi. But we haven’t seen this much snow in many years, either. My guess is that further down river flooding will be more of an issue. So we will be posting updates as we get them.

FEEDBACK
Have a great day! Click on the word COMMENT (or “No Comment” perhaps) below each entry to contribute YOUR comment. Spam control on the BLOG is excellent, so this may take the place of our Bulletin Boards. I love the feedback from our river buff readers.